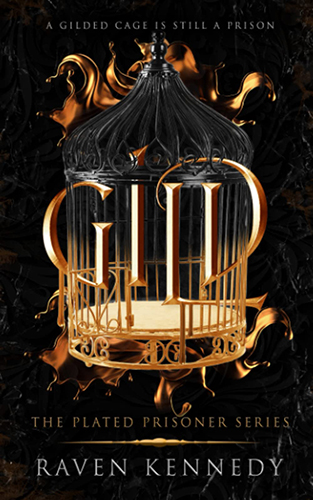 Purchase GILD on Amazon or Barnes & Noble, or read for free with a Kindle Unlimited subscription.*

*These are not affiliate links and I do not make a commission from any purchase made using these links.

The fae abandoned this world to us. And the ones with power rule.

Gold floors, gold walls, gold furniture, gold clothes. In Highbell, in the castle built into the frozen mountains, everything is made of gold.

King Midas rescued me. Dug me out of the slums and placed me on a pedestal. I’m called his precious. His favored. I’m the woman he Gold-Touched to show everyone that I belong to him. To show how powerful he is. He gave me protection, and I gave him my heart. And even though I don’t leave the confines of the palace, I’m safe.

Until war comes to the kingdom and a deal is struck.

Suddenly, my trust is broken. My love is challenged, and I realize that everything I thought I knew about Midas might be wrong.

Because these bars I’m kept in, no matter how gilded, are still just a cage.

But the monsters on the other side might make me wish I’d never left.

The myth of King Midas reimagined. This compelling adult fantasy series is as addictive as it is unexpected. With romance, intrigue, and danger, the gilded world of Orea will grip you from the very first page.

GILD is the first book in The Plated Prisoner series, which reimagines the myth of King Midas, the ruler whose touch turned everything to gold. Unlike some of the original or older versions of the myth, in this retelling King Midas can control his powers. He can even turn people to gold without killing them. And he does so to Auren, his Precious, gold-touched saddle, from whose point of view the story is told.

Auren lost her parents at a young age, which forced her to face a lot of ugliness in the world. Through flashbacks we slowly start to piece together her life before meeting King Midas prior to his ascendance to the throne. Since Auren had to fend for herself, she essentially had no trusted authority figure to guide or teach her about various aspects of life. As a result it’s easy to see how this shaped her perception and portrayal of herself: not worthy of kindness, timid, meek. So when Tyndall Midas rescues her in a time of need, and doesn’t try to take advantage of her, she seeks protection in his kindness. Now, 10 years later, she hides away from the cruel world in a literal, gilded cage.

I thought this was a well-done exposé on manipulation in a relationship. Auren’s tough past life resulted in trauma. Her response was to fully trust the one person who showed her kindness and love. She had no other relationship with which to compare. Though it didn’t start (seemingly) as a toxic relationship, it certainly evolved into one. I think Auren knows deep down that their relationship will never be just about the two of them again. Instead she stands by his side as he weds a queen and must watch him bed other saddles. All the while he promises Auren that she is what matters most to him. She constantly finds a “bright side” and justifies his actions by analyzing all sides of the situation before ultimately absolving him.

Deep down she begins to yearn freedom. But so enmeshed is her heart and mind with Midas that when captured she sees it as atonement for thinking those thoughts. (However, that’s not to say she doesn’t give up a good fight.) Her time out of her gilded cage and into one of captivity perversely allows her some distance for these thoughts to come to the forefront.

Overall, this was a good start to a series. However, I do wish that more actually happened in GILD. While things do happen, I felt like there wasn’t a lot of development. Perhaps I feel this way because most of the story occurs either at the castle or in captivity; this makes it feel a little stagnant even though I technically flew through this book. At times I also felt like the author used too many analogies, which made some of the descriptions seem a bit drawn out. I also found the more modern casual and conversational phrasing mildly distracting at first since this is a fantasy set amongst palatial characters.

That said, GILD intrigued me enough that I started and finished the next book. And the time of drafting this post I had even moved on to the third book! If you read in between the lines, this means I thought the second book much better than GILD.

GILD is great for those who like a dark fantasy with questionable relationships and plenty of room for character growth. It isn’t for the faint of heart as there are some heavy content warnings with this one. It’s a very unique take on an old myth and I can’t say I’ve ever come across another King Midas retelling.

For additional thoughts about GILD, check out reviews by Star-Crossed Book Blog, Before We Go Blog, Cozy Critiques, and Chain of Novels.